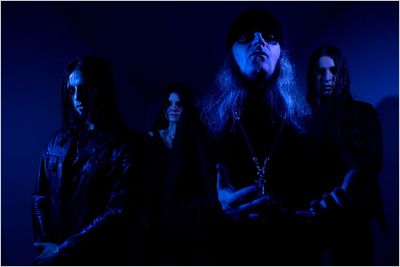 Triptykon, the group formed by Tom Gabriel Warrior after his departure from Celtic Frost in April of 2008, is scheduled to commence studio recording sessions for a first album in mid-August 2009. The album, tentatively titled Eparistera Daimones, will mainly be recorded in southern Germany, with additional recording sessions to take place in Switzerland. Produced by Warrior and Triptykon guitarist V. Santura, the recording and mixing sessions are expected to continue until November 2009. The album is currently scheduled for release in spring of 2010, through the group?s own label, Prowling Death Records (home ofHellhammer and Celtic Frost).

Triptykon was created specifically to continue and further evolve the darkness invoked by its immediate precursors, seminal black/extreme metal pioneers Hellhammer and Celtic Frost. Accordingly, Triptykon’s first album is a persistent development of the virulent and towering musical darkness perpetuated not only by Warrior’s early work but also within his extensive contributions to Celtic Frost’s highly acclaimed Monotheist album. As expected, a significant part of the music on the album consists of material written by Warrior during the past few years and originally intended for Monotheist‘s successor. This is balanced by new, original music written by Warrior and Santura since Triptykon’s inception.

Although the group has so far proceeded in virtual concealment, the music for Eparistera Daimones has been described as akin to a bleak, black ocean of heaviness, accentuated by moments of unexpected grace. Songs currently under consideration for inclusion on Triptykon’s debut album are, among others, “Myopic Empire“, “Among Veiled Spirits“, “Sepultus“, “Abyss Within My Soul“, “Goetia“, “A Thousand Lies“, and the 17-minute “The Prolonging“.

Triptykon will follow the release of Eparistera Daimones with a number of festival appearances and a full tour. The group?s onstage debut is scheduled to take place as part of the renowned Roadburn Festival, in April 2010.

For further information and a full band biography, visit Triptykon?s website at:

and MySpace page at: