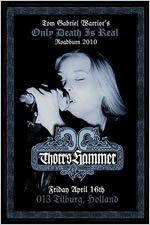 Thorr’s Hammer reunion confirmed for Tom Warrior’s “Only Death Is Real“ at next years Roadburn Festival:

The recently reunited Thorr’s Hammer will be playing Tom Gabriel Warrior‘s Only Death Is Real at Roadburn 2010, set to be held on Friday, April 16th.

Having witnessed some downright incredible events in music this year, the recent Thorr’s Hammer reunion gigs at Birmingham’s own Supersonic Festival and London were among the absolute highlights. For the first time in 15 years, Thorr’s Hammer treated audiences to live renditions of their monolithic, gut-wrenching, black-doom, originally created in the mammoth stoned winter of 1994-1995.

Tom Gabriel Warrior comments: “I am excited and very happy as a fan and I feel proud and honored as a curator that Thorr’s Hammer have accepted my invitation and have agreed to play next year’s Roadburn festival. I greatly respect Stephen O’Malley both as a peer and a friend, and I have long regarded Thorr’s Hammer as pioneers in their field. Having them at Roadburn is a true privilege.”

Runhild Gammelsæter comments: “I speak on behalf of all members of Thorr’s Hammer when I tell of the speechlessness, the thrill going down my back, upon the news that we have been invited by Tom Gabriel Warrior to play the Roadburn festival. Not in my wildest dreams as a teenage girl listening to Celtic Frost and playing doom in Seattle did I imagine that Thorr’s Hammer would be appreciated 15 years later. We are awed of the recognition of our music and thrilled to have this opportunity. It is such a joy for us to play together again, and we look forward to share that joy with the audience. We are very thankful to our fans, old and new, and we are very excited to perform at Roadburn.”

Stephen O’Malley comments: “With respect and honor Thorr’s Hammer accepts Tom Gabriel Warrior’s invitation to perform at his Only Death Is Real night at Roadburn 2010. TGW’s guitar playing, Hellhammer and early Celtic Frost were essential to the collaborative musical directions Greg Anderson and I were forging in the early days of making music together, and we remain faithful servants to this day. Even more essentially, TH was certainly a HH acolyte in the beginning, our direction nearly one of an attempt toward simulation of that acts primal aggressive modes. We are both proud and humbled to be the guest of one of our metal mentors, and to be given the first opportunity to play the original 1994 demo “Dommedagsnatt” material in it’s entirety on the European continent for the very first time.”

Totally living up to the expectations surrounding this highly anticipated reunion, it’s needless to say that we at Roadburn are very pleased with the addition of Thorr’s Hammer, alongside headliner Triptykon to the line-up of Only Death Is Real.

Roadburn 2010, including Tom Gabriel Warrior’s Only Death Is Real, the Goatsnake reunion and Candlemass‘ 25th anniversary show, will run for three days from Thursday, April 15 to Saturday, April 17 at both the 013 venue and Midi Theatre in Tilburg, Holland. There will be an additional Afterburner event on Sunday, April 18, 2010.