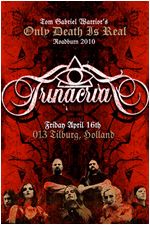 Tom Gabriel Warrior announces the further bands for “Only Death Is Real“ event at Roadburn 2010:

Tom Gabriel Warrior, the founder of Swiss pioneers Hellhammer, Celtic Frost, and nowTriptykon has announced further confirmed acts to appear at his curated event, titled “Only Death Is Real“, appearing at Roadburn Festival 2010 in Tilburg, Netherlands on Friday, April 16th.

The following are a list of the confirmed artists (along with Thorr’s Hammer, Witchfynde, andTrinacria) each of which were handpicked by Tom, and following are their comments about being selected:

“Of course, it is an honour for jesu to be personally invited by Tom G. Warrior to perform at his individually curated ‘Only Death Is Real’ event at Roadburn 2010. It goes without saying, that the music of Tom G. Warrior has had an immense impact on the music, I, Justin K Broadrick, have been producing since 1985, in all of my guises, be it Napalm Death in the eighties, Godflesh in the eighties and nineties, and Jesu currently…” – J K Broadrick

“It’s truly an honor to be invited to play at Tom Gabriel Warrior’s ‘Only Death is Real’ at Roadburn 2010. Tom G Warrior’s playing, as well as his work in Celtic Frost and Hellhammer are not only a staple in the metal world, but one of our main influences and reasons why Evoken exists today. When we started Evoken, never in our dark imaginations would we have thought this day would EVER come. To be invited by our main influence in metal, who all will agree is one of the most well-respected and talented individuals… Tom Gabriel Warrior. We accept this dark gift in complete honor. We shall deliver nothing less than uncompromising, soul-crushing heaviness that Evoken can only bring forth… Be Warned!” – Vince, Evoken

PAGAN ALTAR
“The call from Tom G Warrior to join him at Roadburn came as a complete and utter surprise to Al and I as we had not the slightest inclination we would be asked. Recognition from one musician to another to us is one of the highest accolades we can think of and so would like to say thanks to Tom for asking us. Pagan Altar as a band are really up for it and looking forward to playing at Tom’s ‘Only Death Is Real’ show and are indeed proud to share a stage with these guys!” – Alan & Terry Jones, Pagan Altar

VALBORG
“We met Tom and Triptykon bass player Vanja in Switzerland before a Valborg concert and had some really great conversations. So it was indeed a very special honour that we got invited by Tom to play at the Roadburn 2010. In the midst of irrelevance, Tom G. Warrior gave us more confidence to go ahead on the path we chose. We are still fans and he is the master of extreme metal. So, we will slay the world to pieces at the Roadburn Festival to honour his almighty work. Be prepared motherfuckers! Feel the aggression rise!” – Christian, Valborg

SERPENTCULT
“We were speechless, but extremely honoured and humbled when we got the invitation by Tom to perform at the next edition of Roadburn. Celtic Frost and Hellhammer had such an important impact on us that it inspired us to pick up our guitars many years ago. Now we find ourselves being invited to Roadburn, by the very creator of this music himself. We can’t wait to head back to the stages of the 013 venue! Our appearance at the festival will also give us the opportunity to present our new album ‘Raised By Wolves’ to the world.” – Fred, Serpentcult

SHEVER
“Tom always supported us to continue in our chosen musical way -we feel very honored and happy about his invitation to Roadburn 2010, and having the possibility to contribute some evil witch doom to this unique event –a dream came true, and we’re ready to give all we have for this show!” – Nadine, Shever

NONEUCLID
“We are very honored to be part of this festival, and this special night. I have been into Celtic Frost since I was 13. I had just started playing guitar, and they were my first contact with non-tonal music – a fact that had far-reaching consequences, since life took me to become a contemporary composer. Celtic Frost’s approach to their lyrics also made a mark on us all; their taking the listener into rotten evil worlds while maintaining a high level of dignity made 90% of metal bands look like embarrassing adolescents in my young eyes, and they set the bar high in the black sonic arts for everyone who came after.

When V Santura joined them as touring guitarist, that was the biggest thing ever to happen in the music scene of our home town… it seems unreal that now, so many years after, the mighty Tom G. Warrior tells us he’s into our little band. So when The Warrior calls, there can only be one answer from us and that’s ‘yes Sir, with pleasure’!” – Morean, Noneuclid

In addition, Tom Gabriel Warrior will introduce his new incarnation, Triptykon, who will make their on-stage debut at Roadburn 2010 in the headlining slot in support of their forthcoming album, tentatively titled “Eparistera Daimones“. It’s needless to say that we at Roadburn are thrilled by Tom’s additions to Roadburn 2010.

The four-day Roadburn Festival will be held once again at the esteemed 013 venue, and Midi Theatre in Tilburg, Holland from Thursday, April 15th through Sunday, April 18th, 2010.