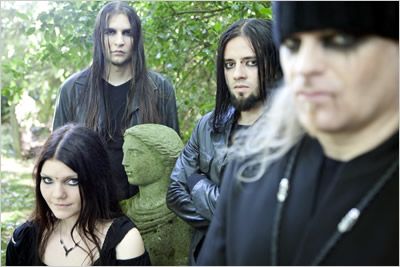 Tom Gabriel Warrior: “I am very pleased about continuing my long-standing and very constructive affiliation with Century Media Records. After the demise of Celtic Frost, I was looking for continuity in every other aspect of my life, and the cooperation between Prowling Death Records Ltd. and Century Media Records has in the past already provided an outstanding platform for releases by Hellhammer (the Demon Entrails demo reissue album, 2008) and Celtic Frost (Monotheist, 2006).”

Eparistera Daimones will feature the following nine songs, at a playing time of some 70 minutes:

A further three new Triptykon songs have also been recorded, and they, too, will be released in the course of 2010.

The album will be further distinguished by stunning artwork from two highly acclaimed international artists, who, together with the group themselves, thus form their own artistic triptych.

Triptykon consists of V. Santura (guitar, vocals), Norman Lonhard (drums, percussion), Vanja Slajh (bass), and Tom Gabriel Warrior (voice, guitars). The group has unambiguously stated that it pursues the continuation and further development of the path Warrior began in Hellhammer and Celtic Frost. The group’s onstage debut is scheduled to take place as part of the distinguishedRoadburn Festival, on April 16, 2010.

For further information and a full band biography, visit Triptykon’s website (www.triptykon.net) and MySpace page (http://www.myspace.com/triptykonofficial), where samples of the album’s music have also been posted.