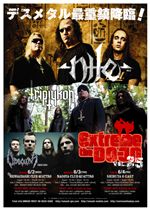 We feel extremely honored to be able to announce Triptykon‘s first concerts in Japan. These shows will be part of the Extreme The Dojo Vol. 25 tour, and Triptykon will play as double-headliners withNile. The special guest for these concerts will be German group Obscura.

The Extreme The Dojo Vol. 25 dates are:

Tom Gabriel Warrior: In 2007, Japan was the setting for some of Celtic Frost’s most extraordinary concerts ever. I am thus truly delighted to return and grateful that we will get a chance to perform Triptykon’s mass of darkness there so early on in the band’s career.

We are equally proud to announce that Triptykon have been confirmed to headline the Jalometalli Festival in Oulu, Finland, on August 14, 2010.