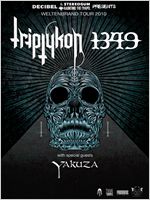 Decibel Magazine and Stereogum/Haunting the Chapel present the “Weltenbrand Tour 2010” featuring the North American debut of Triptykon with 1349 and Yakuza rounding out the bill. Be sure to visit www.myspace.com/triptykonofficial to view the entire tour itinerary. You don’t want to miss out on this monumental event when it hits your city.

Tom Gabriel Warrior (vocals, guitars) describes his emotions on the eve of this new undertaking:

“Ever since my earliest days in Hellhammer and Celtic Frost, I have been extremely fortunate to be able to count on the support, fanaticism, and immense loyalty of the North American metal scene. The recognition my work has received there eclipses anything I have ever encountered in my own native country. Of the 125 concerts performed on the final Celtic Frost tour in 2006 and 2007, for example, a full 71 were played in North America. Some of these performances rank among the most memorable ones in my entire career.“

“It is thus an immense honor for me to now bring my new group Triptykon to North America for the first time. Triptykon is further pursuing the path I once began with Hellhammer and Celtic Frost, and I am looking forward to continuing to forge this darkest of musical alliances with all of you. We shall all celebrate masses of unleashed heaviness and morbidity. Only death is real!“

The main purpose of Triptykon is to continue where Celtic Frost left off and to satisfy Warrior’s undying passion for extreme music. Indeed some of the material Fischer was working on post-“Monotheist” ended up on Triptykon’s debut album, “Eparistera Daimones“, so it stands to reason, besides the obvious fact that Fischer fronts Triptykon, the two are sonically and spiritually closely connected. As can be expected, Eparistera Daimones is therefore a musical leviathan.

“It’s testament to Triptykon’s towering strength that Eparistera Daimones has the power to make its mark in the midst of the thousands of bastard offspring of its ultimate originator.“
– Metal Hammer, UK

“The end is not nigh, it has just begun. 25 years on from Hellhammer, Warrior is still redefining heavy.“
-Terrorizer, UK

“With Eparistera Daimones, Tom Gabriel Warrior’s ability to execute his craft expertly is certainly greater than ever.“
– Decibel

“The fact that Eparistera Daimones meets or exceeds every expectation is a testament to Triptykon’s talent. Say hello to the best album of the new year.“
– Invisibleoranges.com

“Thunderously heavy and epic in scope, a must-have album.“
– Metalpsalter.com

“This is one of the heaviest, angriest, gloomiest releases ever. This album is a strong contender for “Best of the Year” lists; it certainly tops mine at this point.“
– Teethofthedivine.com

“Triptykon’s debut proves that Fischer is and always has been Celtic Frost.“
– Hellbound.ca

“Tom Gabriel Warrior is the mastermind behind some of the absolutely best metal albums ever in my opinion. The man is a genius and deserves all the praise he gets.“
– Nocturno Culto (Darkthrone), Terrorizer, UK

“Eparistera Daimones is a dark and pummeling debut.“
– Guitar World

“The bottom line is that Triptykon has succeeded in creating an album that will stand by itself while also pleasing the legion of established fans who wanted more releases from Celtic Frost.“
– The Examiner