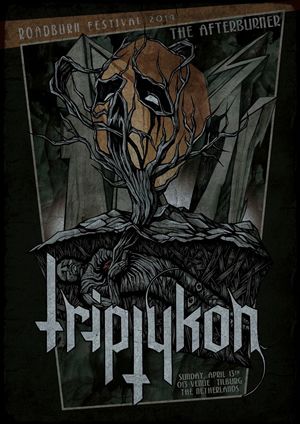 In 2010, the organizers of Holland’s highly acclaimed Roadburn Festival invited Tom Gabriel Warrior, founder of Hellhammer, Celtic Frost, and Triptykon, to act as the curator at that year’s festival. Under the banner of Only Death Is Real, Roadburn 2010 thus became the venue for the presentation of Triptykon’s newly-released debut album, Eparistera Daimones, as well as Triptykon‘s first official life appearance. We felt very honoured by the confidence Roadburn placed in us, and the event will forever rank as one of the most significant experiences in the existence of Triptykon.

We are therefore deeply delighted and proud to be able to announce that Triptykon has been asked to return to Roadburn in 2014. To commemorate the release of Triptykon‘s long-awaited new album in spring 2014, Triptykon will appear on Roadburn‘s main stage at the 013 venue, on Sunday, April 13, 2014.

Tom Gabriel Warrior: “Roadburn is very likely the most extraordinary, daring, and vigorous festival in what has otherwise largely become a blandly repetitive and overly commercialized heavy rock scene. Moreover, anybody who has ever attended Roadburn can confirm that no other festival exudes such a unique feeling of radiance and creativity among audience and performers alike. Triptykon’s return to Roadburn in 2014 signifies yet another truly unique chapter in a long affiliation with the festival, dating back to the riotous days of Celtic Frost. I am deeply grateful to Roadburn’s artistic director Walter Hoeijmakers for his extraordinary friendship and his continued faith in the path we are pursuing with Triptykon. In return, we shall duly transform Roadburn into a church of darkness.”