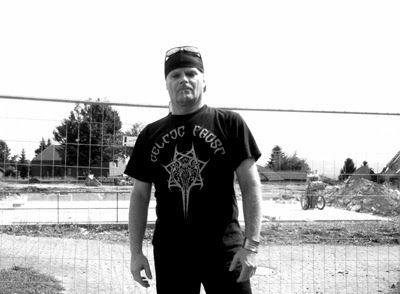 “These are photos I took on August 3, 2013, almost exactly 30 years after Hellhammer released the Triumph Of Death demo. They depict the remnants of the somewhat fabled Grave Hill bunker, the former rehearsal room of Hellhammer and Celtic Frost, in Birchwil, Switzerland.”

“I had been alerted some time ago that the building housing this bunker was scheduled to be demolished, but I did not know when this was supposed to take place. It was therefore utter coincidence that I arrived at the site exactly at the time it all was happening, during one of my regular mountain biking tours through the area where I grew up and subsequently attempted my earliest musical endeavours. It was difficult to come to terms with this scene, in spite of the advance warning. So many things had taken place here, many of which would much later reveal their significance with regard to the lives of all involved.”

“I moved into this bunker in early 1982, with my first, utterly deficient band, Grave Hill. From the remnants of Grave Hill, Steve Warrior and I formed what would become Hellhammer, in May 1982. From its very first day to its very last, the new band was based in this putrid, mildewed bunker. Many of the earliest photos of Hellhammer were taken in it, and in June of 1983, we recorded the Death Fiend and Triumph Of Death demos there.”

“As Hellhammer never played a concert, the only live performances ever witnessed of the band took place at this location, when our small circle of friends would attend some of our many rehearsal sessions and, particularly, when we honoured the arrival of the new year with a full set during the night of December 31, 1982, to January 1, 1983.”

“In June of 1984, the newly created Celtic Frost played its very first practice session at the Grave Hill bunker, with short-time member Isaac Darso on drums. Only days later, we wrote both the music and lyrics for Procreation (Of The Wicked) there, after Stephen Priestly agreed to be our session drummer so we could complete the Morbid Tales album. Once again, some of the earliest photos of the band were taken within the walls of this concrete tomb. The same was true when drummer Reed St.Mark joined the group as a permanent member in early 1985.”

“We rehearsed and arranged Celtic Frost’s To Mega Therion and Into The Pandemonium albums there and practiced our music for our first extended tours in numerous endless sessions. Always accompanied by the bunker’s distinctive odour, and with instruments that would literally begin to rot if left there too long.”

“The bunker also witnessed the band’s miserable dissolution and infinitely disgraceful subsequent downfall as 1988 dawned. But this was also the year Celtic Frost was asked to vacate the location, as the village’s civil defence organization was seeking to refurbish and repurpose the bunker. It couldn’t have been more symbolic.”

“I visited this landmark of my personal path many times in later years, not least to take images when working on the Only Death Is Real book. I am glad now that I did. As I arrived there this August to be confronted with the scene depicted in the photos shown here, there was nothing left of the aura. Not a trace. The fact alone that all the trees around it had been cut down served to rob the place of any magic, even if one managed to disregard the debris-filled hole in the ground.”

“The warning signs couldn’t detract me, of course. I climbed across the chunks of concrete and descended down to the damaged bunker. Parts of it had filled with water, but the former rehearsal room itself still remained largely untouched. It was deeply peculiar to see it like that. I stood at the same spot I always used to stand when looking back in to check if everything was in order before locking the door and leaving for home, so many years ago. After taking a few pictures, I gathered a few fragments from the debris to serve as personal reminders and then left.”

“And every breath I take leaves a black void in my heart.”