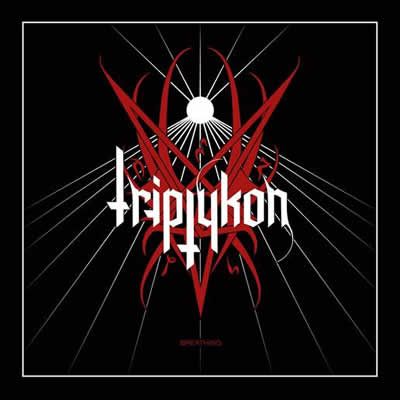 To commemorate the unveiling of Melana Chasmata, Century Media will release a collector’s gatefold 7″ vinyl single, featuring the songs Breathing and Boleskine House. The Breathing single will contain an approximate playing time of 13 (!) minutes and its cover artwork can be seen above.

The single will be available on March 17, 2014 via CM Distro and be limited to a pressing of 1000 units (800 copies in black vinyl and 200 copies in transparent red vinyl). As of today, you can pre-order the 7″ from CM Distro at the following location: http://smarturl.it/triptykonCMD

Breathing and Boleskine House will also be available as a digital single (including the option for a digital booklet), and they will be streamed on YouTube and Soundcloud.

Melana Chasmata will feature the following nine songs, at a playing time of around 67 minutes:

Like its predecessor Eparistera Daimones, the album was produced by Triptykon’s singer/guitarist Tom Gabriel Warrior and guitarist V. Santura and recorded and mixed at V. Santura’s own Woodshed Studio in southern Germany as well as at Triptykon’s rehearsal facilities in Zurich, Switzerland, in 2013 and 2014. Those who have already heard Melana Chasmata have described it as “atmospheric, dark, diabolical, and dramatic”, “diverse, epic, and doomy, but on an entirely different level”, “a fierce boulder of abhorrence”, or “very heavy and yet very aesthetic at the same time”.