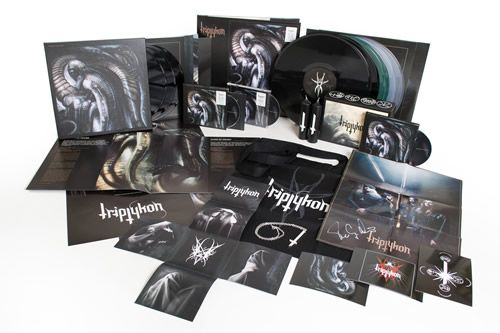 Already receiving massive media acclaim and having been launched by means of a triumphant live performance at Sunday’s Afterburner event as part of this year’s Roadburn Festival, Triptykon‘s much anticipated sophomore album, Melana Chasmata, is released now via Century Media Records/Prowling Death Records.

Melana Chasmata is available in the following formats:

You can order Melana Chasmata and various merch items at the band’s official webshop at shop.triptykon.net and for the US at www.jsrdirect.com.

Digital Buy Links are via Amazon: http://amzn.to/1iUFA1N and iTunes: http://bit.ly/Rmu8WF.

Please take note: Century Media have discovered serious manufacturing issues on the 2LP format of Triptykon’s Melana Chasmata album and were forced to repress it to guarantee all of you a satisfying and flawless product. Unfortunately, this means the delivery will be delayed by some days. While everyone involved is working at full speed to rectify this situation, Century Media would like to sincerely apologize for the inconvenience and will deliver all orders of the vinyl format as soon as ever possible.

Here is a list of all upcoming live-shows for Triptykon, including their recently announced appearance at Jallometalli Festival in Oulu, Finland on August 8th, 2014: