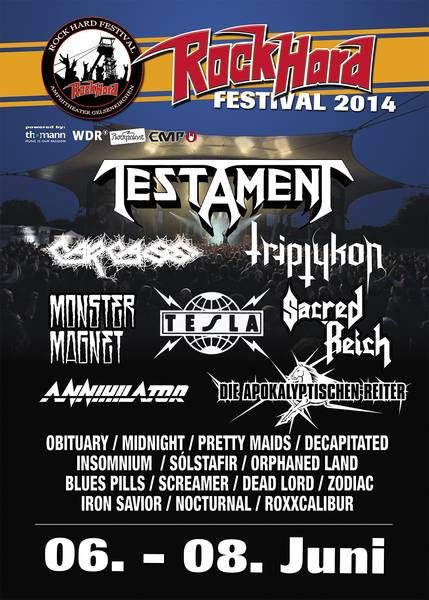 The show will be streamed online via the WDR Rockpalast website at 9:30 PM CET (Triptykon stage time). Check here for more details: http://www.wdr.de/tv/rockpalast/. The Rockpalast recordings from this year’s festival will also be aired on the WDR TV channel on Monday, June 16th and Monday, June 23rd, each show starting 15 minutes after midnight and running for 3 hours.

Triptykon’s Melana Chasmata album has received much acclaim both by media (where the album scored several “album of the month” titles and lead to the band gracing many magazine front covers) but also by the fans, whose support catapulted the release into the official sales charts of various countries, with the following peak positions: # 11 in The Netherlands, # 52 in Germany (In its 3rd week!), # 32 in Switzerland, # 16 in Finland and # 171 in the US Billboard Top 200 charts (with a # 4 spot in the Heatseekers listing!).

Here is a list of all upcoming live-shows for Triptykon, including their recently announced appearance at UK’s Bloodstock Open Air on August 8th, 2014: