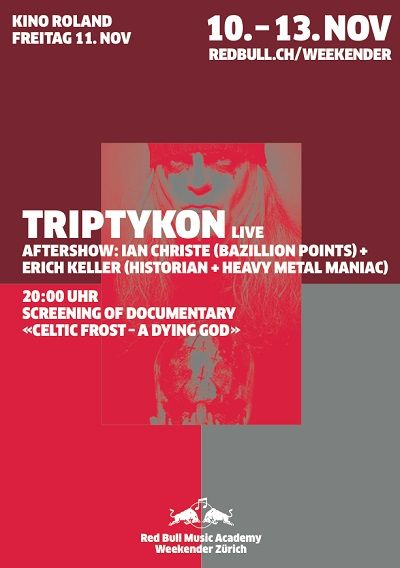 Triptykon’s special, intimate concert in Zurich, Switzerland, tonigh, November 11, 2016, as part of the Red Bull Music Academy is SOLD OUT. The concert will take place at the Roland cinema, a unique and somewhat notorious venue that will be converted into a small club for Triptykon’s performance.

The concert will be preceded by the customary Red Bull Music Academy discussion session, held at the Lecture Room of Club Zukunft across the street from the Roland cinema and featuring Hellhammer/Celtic Frost/Triptykon singer/guitarist Tom Gabriel Warrior. The discussion will be hosted by journalist/author/publisher Ian Christe (Sound Of The Beast; Bazillion Points Books).

Moreover, Triptykon’s concert will also be preceded by a special screening of the Celtic Frost – A Dying God documentary (2008) by director Adrian Winkler. The concert will be followed by special metal DJ sets performed by esteemed friends of the band, Erich Keller and Ian Christe.